Follow Girl's Guide to the Gun World on WordPress.com

Everyday New York City’s first responders answer to thousands of calls for help around the city. From caring for the sick and elderly, to preventing crime, and fighting the cities worst fires. Our heroes work day in and day out, never holding a normal sleep schedule and putting strains on their bodies and minds that most people could not comprehend. Putting this strain on their bodies often increases a first responders risk in injury, illness and disease. It’s time to start helping those who help us, and Chris Torres from Brooklyn NY knows just the way to do it.

After being an athlete for most of his life and studying biology and education in college, Chris made the decision to take the FDNY test in 2012. He immediately began prepping himself and his body for the academy knowing the physical challenges that lie ahead of him. After joining his first Crossfit gym he began studying and eventually becoming a physical trainer and instilling his passion for fitness and training into others. After passing FDNY Probie School, Chris was assigned to Engine 242 in Brooklyn where he was introduced to other civil servants, including the emergency medical technicians, paramedics and police officers who he often responded to calls with. Torres realized just how important physical fitness and health was to all of our first responders.

This past month, Torres launched N.Y.C. I Got Your Six, a fitness academy tailored to the physical and mental stressors these careers have. “What’s the point in giving 25+ years of your life and beating your body if you can’t enjoy it when you retire?” According

to the CDC, physical overexertion is the cause for most injuries to fire fighters and first responders. Physical fitness is something we all, as first responders can focus on and Chris is making sure of that.

I decided to check out his opening class, which was located at Crossfit STEED in Coney Island, Brooklyn. The workout was modeled after a typical Crossfit WOD that included functional fitness, functional strength training and metabolic conditioning. As someone who doesn’t generally work out as often as I should I found that Chris was able to tailor each part of the class to individual needs. I wasn’t able to do a traditional pull-up, but was shown an alternative which worked out the same muscle groups as well as building a foundation to eventually be able to do a traditional pull-up. That’s what this is all about, building your strengths and learning how to use your body to avoid injury when on the job.

Walking into the gym we were immediately met with the white board, which displayed the workouts we’d be doing that evening. As Chris went through each stage he explained and demonstrated each workout so that we all knew what we would be doing to avoid any injury and to keep us all in pace. Throughout the workout, he and some of the other experienced athletes would help those, like myself who were not as experienced. Everyone was willing to help, coach, and cheer each other on to finish each round. 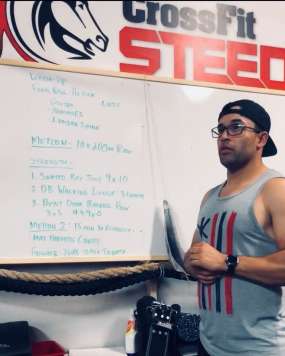 “It takes someone who deals with the grind on a daily basis to understand what someone needs” Chris expresses after his first class. Being able to have a personal trainer who understands exactly what your body is going to go through is the ultimate benefit. “The guys who run this gym are very, very good at what they do,” Torres says about the owners and trainers at Crossfit STEED. “The owners were unbelievably receptive to start the program and interested in the operation of the program. A large amount of the current members are already civil service, so now we have a home centered around them”. Torres uses his certifications in Crossfit Level 1 and 2, Crossfit Anatomy, Crossfit Weightlifting 1 and NASM to create his own workouts that will most benefit our first responders.

As Torres says “It’s time for … A CHANGE OF MINDSET”. Traditional workouts and gym routines are not enough to keep our first responders healthy and injury free. They need to do more to prep for these academies and the job that lies ahead. You can find more information on N.Y.C. I Got Your 6 by going to Facebook or Instagram @igotyour6nyc or E-Mail: igotyour6nyc@gmail.com.

You can also send Chris a message below for more information: